Dr Tan Chee Khoon, a Christian politician, stood up for “what is  right” and believed “the voice of dissent is vital in a parliamentary democracy”. This earned him the moniker “Mr  Opposition”, respected by friends and foes alike. Born in Cheras, Selangor, on March 4, 1919, he was the second child of Tan Chin Chee and Tay Kim Siew who had three sons and two daughters. They also adopted one son and one daughter.

Tan learnt the value of hard work from his father who emigrated from China in 1898 at the age of 19. On weekends, he and his siblings woke up at 5.30am to feed the animals on their farm before cycling the five miles to Sungei Long to tap rubber with their father. They returned at 4pm to tend to their family’s vegetable patch and fruit trees.

His kind mother’s knowledge of folk medicine inspired him to become a doctor. She enthralled her children with Bible stories and the family attended Cantonese services at the Wesley Methodist Church in Kuala Lumpur.

Tan had his preschool education at the Pudu English Girls' School before going to the Victoria Institution (VI) at Jalan Bandar, where Ong Yoke Lin (later, Tun Omar Ong, a cabinet minister), and Frederick Arulanandom (a judge) were his contemporaries. Later, he transferred to Kajang High School which was nearer to his home before rejoining VI where he became a prefect, active debater and a voracious reader.

His application to King Edward VII College of Medicine in Singapore was initially rejected due to blindness in his left eye caused by an accident with a rubber tapping knife when he was 13. His headmaster and eye surgeon intervened to reverse the decision and he began his medical studies in July 1939.  Although he did not win the coveted Queen's Scholarship, he received scholarships from VI and the King Edward VII College worth $25 and $50 a month, respectively.

When war erupted, the medical students joined the Medical Auxiliary Service to attend to war casualties. On February 14,  1942, a bomb hit Tan Tock Seng Hospital, killing many including a medical student. As Tan and 21 others were burying his body, artillery fire killed 10 of them and a small piece of shrapnel hit Tan’s left calf. Three days after the fall of Singapore on February 15, Tan cycled back to Kuala Lumpur where he remained throughout the Japanese Occupation.

After the war, Tan completed his medical studies and joined a private hospital in Singapore for three months before serving two years at the General Hospital in Kuala Lumpur. In May 1952, he went into private practice at 329, Batu Road (now Jalan Tuanku Abdul Rahman). He often gave free treatment, inspired by the example of his family's sinseh Oo Peh. Tan learnt Tamil and Punjabi to communicate with his patients.

He created various awards and scholarships to give back to his alma maters: Kajang High School, Victoria Institution, Methodist Boys' School (he was on the Board of Governors from 1958 -1989), and the Faculty of Medicine, University of Malaya (formerly King Edward VII College). These awards were named after his parents and himself except for Kajang High School where the Gates Medal was to honour his former headmaster C.E. Gates who personally taught him Latin, a compulsory subject in the Queen’s Scholarship exam.

In the late 1960s, he set up a private hospital, the Sentosa Medical Centre, which was officially opened by the then Prime Minister, Tun Abdul Razak, in 1972.

In the selection of faculty deans, he put up a strong fight for Ungku Aziz to be made professor of economics instead of Professor T.H. Silcock, much to the chagrin of the expatriates on the selection board. Similarly, he convinced the board to select Dr Thong Saw Pak as professor of physics and Dr T.J. Danaraj as professor of medicine. During the latter’s tenure, the UK General Medical Council officially recognised the M.B.B.S. programme of the University of Malaya, lifting it to the status of an internationally-respected institution.

Tan was elected vice-chairman of the University of Malaya Council in 1967 and chairman in 1971. At the end of his chairmanship, he was awarded an honorary Doctorate of Laws by the university.

He was persuaded by his friend, Lee Moke Sang, to venture into politics by joining the Kuala Lumpur branch of the Labour Party of Malaya in 1952. Working with other parties, he helped to  prepare submissions to the Reid Commission which drafted the Constitution for a new, independent Malaya.

Tan chaired the Labour Party Kuala Lumpur branch in 1956, the Selangor branch in 1959, and became the national vice-chairman in 1959. But he did not contest in the elections then because he felt that one must first learn and be good at what one was doing, and not seek quick promotion. In 1964, he contested and won his first federal seat of Batu (his first of three terms) as well as the Kepong seat (1964-1978) in the state election. Meanwhile,  he helped to found the Gerakan Party with Dr Lim Chong Eu and Professor Wang Gung-Wu. Later, in 1971, he helped found the Parti Keadilan Malaysia (PEKEMAS).

He strongly maintained that the Constitution was not an instrument to be tampered with. He recognised that the ruling Alliance Party would always have the numbers to amend  the Constitution, but he still rallied against such an exercise. He constantly reminded Parliament that the founding fathers had enshrined in the Constitution that Malaysia was to be a secular, not religious, state. As such, religious freedom and cultural differences could not be elevated one above the other, aside from during official state functions where Islam is the official religion of the state.

Tan always had the interests of the poor at heart, and often lambasted economic growth policies which hurt the poor and resulted in unequal distribution of gains between the rich and poor. He avoided the ivory tower of politics and kept in touch  with the grassroots by being at his office at least two days a week, for his constituents to drop by and talk to him.

After he retired from politics in August 1977, he continued to champion his principles by writing his popular column Without Fear Or Favour in The Star, a Malaysian national daily. To date (2021), he is the only Opposition leader to have been awarded a “Tan Sri-ship”, such was the high regard that the government and Parliament had for him.

Tan was clear that the Opposition’s role was not to oppose per se. He backed the affirmative action of the National Economic Policy which created more places for Malays in the education and commercial sectors. In his words, it was a necessity to give a handicap to the less advantaged. But in his view, this should not continue ad infinitum and must be properly used. He supported the National Language policy but cautioned against extremist fervour lest the strong foundations of English in Malaysia be eroded. In his autobiography, he had fine words for Tunku Abdul Rahman, Tun Dr Ismail, Tun Tan Siew Sin and Tun V.T. Sambanthan. He believed in giving praise where it was deserved.

He never forgot his church duty as he faithfully attended services with his family and served the Wesley Methodist Church board from 1953. At various times, he became a lay leader, chairman of the commission for stewardship and finance, and was also a representative at various international events.

One incident in 1964 sums him up best: At a customs checkpoint at the Singapore railway station, Tan paid a duty of $25 levied on his goods but the receipt noted “$3”. He pointed out the error to the officer who insisted that he had paid only $3. “You watch out,” said Tan, who then reported the incident to the Minister of Finance. Years later, when he was eating at a restaurant, a man approached him, shook his hand and thanked him. “For what?” asked Tan. The man replied: “I was the customs officer whom you reported in 1964. I was transferred in 24 hours. You put the fear of God into all of us.”

Tan’s political career was disrupted when he had a stroke on November 5, 1976. He passed away on October 14, 1996, leaving behind his wife, Liew Fong Ying, and children Dr Tan Kee Keong, Dr Tan Kee Kwong, Poh Ling, Kee Keat, Poh Lee and Poh Lai. He had run the race, he had fought the good fight, he had kept the faith and the conscience of the nation.

This story which draws on From Village Boy to Mr. Opposition: An Autobiography by Tan Chee Khoon originally appeared on the website of Victoria Institution Kuala Lumpur (http://www.viweb.school/TanCK.htm) and has been edited for the dcbasia.org website. 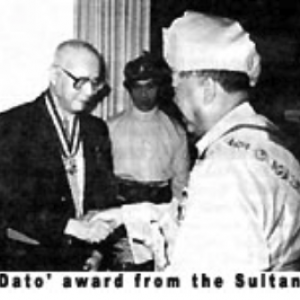