Mabel Marsh was born on April 29, 1881 on a farm in Kansas, USA. She studied at Kansas State Normal and graduated from high school in 1897. She trained as a teacher and graduated in 1910 from Northwestern University, Illinois.

Her missionary intent came from her involvement, together with 40 others, in the J.R. Mott crusade for missionary volunteers who were “to win the world for Christ in their generation”. Dr John R. Mott greatly helped in opening these volunteers’ eyes to the needs of the world. Marsh related how she was accepted as a “‘candidate for work in the foreign field”.[1]She arrived in Malaya on December 22, 1910 after a 44-day journey.

The British colonial government had started the Government Girls' English School in 1896 in Kuala Lumpur, the newly established capital of the then Federated Malay States. The school was a simple wooden bungalow on stilts with an attap roof, built on an acre of land at the corner of Kampung Attap and High Street in Kuala Lumpur. Three years later, the Government Inspector of Schools appealed to the District Superintendent of the Methodist Mission, Dr William Kensett, to take over the running of the school due to difficulty in obtaining long-staying teachers. The school was renamed Methodist Girls’ School (MGS) of Kuala Lumpur and became the responsibility of the Methodist Mission until independence in August 1957.

On February 25, 1900, the Women’s Foreign Missionary Society in America, at the request of the Bishop of the Methodist Mission, sent Miss Mary Meek to be the first missionary headmistress of MGS as well as Miss Louella Anderson who took charge of music at the school. In February 1911, Bishop F.W. Oldham appointed Mabel Marsh to MGS, replacing Miss Ary Holland.

Her recorded years of service and the number of times she returned as headmistress of MGS is a testament to her perseverance and dedication despite the difficulties of war and serving as a woman missionary.[2]

Education was not considered necessary for girls back then. Marsh, like the other headmistresses before her, had to visit homes to persuade and encourage the conservative parents to allow their daughters to attend school. It took determination and persistence to wear down the prejudices regarding education for girls. Progress was slow and achieved only with great effort.

When she took up her post as headmistress, the school had 100 pupils with only four girls in Standard VII and nine girls in Standard VI. These classes met in the same room as the Standards IV and V. There was hardly any room. Two of the major obstacles she faced were the lack of trained teachers and the determination of local parents to get their daughters married off through arranged marriages.[3]There were far more bachelors than eligible women, which meant that young teachers were snapped up by the bachelors and lost to the school. Thus, the school kept losing its staff and its pupils to matrimony.

Ten years after the Methodist Mission took over the responsibility for the school, MGS celebrated the success of one candidate in the government Standard VII examination. This was an achievement as most girls did not continue their education beyond Standard IV.

Marsh continued to augment MGS’s achievements. The school curriculum slowly expanded to include various subjects like algebra and geometry for Standard VII and activities such as singing, music and physical education. In 1911, the girls participated in a sports meet organised by the Victoria Institution. It was considered a huge achievement then as parents did not approve of physical education within the school compound. A year later, MGSKL launched its own Sports Day which became an annual affair that developed to include more events. The first Sports Day featured merely relay games such as egg and spoons and three-legged races, and a “boat race”.[4]

Marsh helped start the Girl Guides movement in 1917, and the Methodist Girls’ School’s 1st Company of the Selangor Contingent was well-known. Aside from the Epsworth League (forerunner of the Methodist Youth Fellowship), the introduction of the house system in 1929 saw many more activities and competitions taking place. MGS was the first girls' school to challenge a boys' school team in an inter-school debate — and win! It was also the first girls' school to maintain a fully qualified staff.

When Marsh became headmistress of MGS KL, the old building was already bursting at the seams. There were insufficient classrooms, lack of a playground for sports and a great deal of noise from the surrounding area which made the process of teaching and learning almost impossible. On November 14, 1914, the building caught fire and, as a result, a new building had to be erected. In the meantime, by Christmas of that year,  Marsh had improvised and there were attap sheds housing the school.

The enrollment by then had risen to 250 and the school was becoming an influence. Unfortunately, the rapid growth of Kuala Lumpur in the years before the war meant that the three-storey building had to make way for new infrastructure that was developing. A new site and building had to be found for the school. There were three attempts at fundraising for the new building but these were hindered, firstly by the Depression (in 1930) and then the onset of World War II.

Marsh returned in 1946 after the war. Her task was to complete the new MGS building project which had grown into a very large building programme on a seven-acre plot. She was able to stay on until the present premises of the school were started. The school progressed greatly under her leadership, increasing from 100 to 2,000 pupils by the time she left in 1950, aged 69.

She taught for 40 years and had the distinction of being the longest serving headmistress in Malaya as well as being recognised as the founder of the school.[6] Soon after her retirement, the road leading to the new Methodist Girls’ School in the Brickfields area in Kuala Lumpur was named after her.[7] It was later renamed Jalan Tun Sambanthan 4.

She was awarded the Member of the Order of the British Empire (MBE) from the British Government in recognition of her many years of service, elevating the contribution of women in Malaya, an honour that few Americans had received.[8]

In addition to her service as an educator, Marsh was a long-standing member of the Religious Education Commission of the Malaya Annual Conference of the Methodist Church. She was actively involved with the YMCA and was instrumental in organising the Kuala Lumpur Branch in 1913. A report in the July 1950 edition of the Malaysia Message noted that she also introduced 23 new missionaries to Malaya and served with a total of 90 missionaries in Kuala Lumpur.

Marsh wrote three books during her time in Malaya. The first was Service Suspended (Marsh, Mabel. Service Suspended. New York: Carlton Press, 1968) which contained correspondence from June 1939 to May 1942, sharing her experiences as a missionary teacher returning to Malaya and then leaving with the Japanese invasion.

The second was Hardscrabble: Memoirs of Malaysia 1910-1960 (Marsh, Mabel. Hardscrabble, Memoirs of Malaysia 1910-1960.  Kuala Lumpur: The Methodist Girls' School, 1960. 131 pp.) Of the title, Marsh said, "Hardscrabble was the unsavory reputation of the Methodist Girls' School in Kuala Lumpur, Malaysia.” The book was an account of her life from a Kansas farm girl, her struggle for education from primary school to obtaining her college degrees, adjusting to the strangeness of Malaya, being an American teacher in a British school system and having to deal with myriad languages, cultures and religions.[9]

She also privately published A Wagon That was Hitched to a Star which were letters written to a friend in the United States by a Methodist missionary in Bengal and Singapore from 1910-1917.

Marsh was an integral part of MGS’s growth and development and it is difficult to separate the history of the school from that of the principal of the school. Prayer, vision and devotion propelled Marsh in all those years of missionary service in Malaya. She believed in the importance of education to help develop a Christian outlook and principles in the individual, which included opening a world of opportunities and experiences to women. She was a courageous pioneer, missionary and educationist. Her strong pioneering spirit, richly spiced with a sense of mission and deep Christian compassion, shone forth in all her educational efforts.[10]

The writer was a librarian at Universiti Sains Malaysia in Penang.

Doraisamy, T.R., Heralds of the Lord: Personalities in Methodism in Singapore and Malaysia. Singapore: The Methodist Book Room, 1988.

Malaysia: Board of Education of the Malaya Annual Conference, 1964. 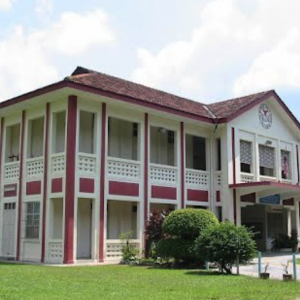