Dr Andrew Ng Kang Chin was born on May 5, 1947 to Ng Eng Chong and Yap Hoon Chiew in Tangkak, Johor, in Peninsular Malaysia. He was the sixth child in a family of five sons and two daughters. In 1978, at the age of 31, he became the first Singaporean and Asian medical missionary to serve in Galmi Hospital in Niger[1], West Africa. Ng has often been hailed as a trailblazer for Asians to world missions. After him, there was an outbreak of Asian interest in Africa in particular and cross-cultural missions in general. He and his wife, Belinda Lim Chin Choo, were instrumental in setting up SIM East Asia Office[2] to reach out to the region.

Ng’s parents were Hinghwa (a Chinese dialect group) who were born in Putien in the province of Fujian, China but had come to Southeast Asia in the 1930s to seek their fortune. They were devout Christians, having been converted in the 1940s in then Malaya (now Malaysia) through the revival preaching of Dr John Sung. They ran a provision store in Johor and had thought to settle in Malaya. But the political unrest and guerrilla warfare in the years following the Japanese invasion in 1941 posed security risks to civilians and the couple fled to Singapore in 1951 when Andrew was just three years old.

Ng’s interest in missions began at the age of 11. While attending Sunday service with his parents at the Hinghwa Methodist Church in Singapore, a guest missionary’s sermon struck a chord with him. It led him to make a commitment in his heart to obey the missionary call. His response to this call was a surprise considering that he received Jesus Christ as his personal Saviour only in 1961 at the Bartley Youth for Christ (YFC) club, when he was a 13-year-old student at Bartley Secondary School. Soon after, he started devouring the Bible and devoted his time to serving God in church. He conducted Bible lessons for young believers in the faith and discipled them whenever the need arose. 1n July 1962, when the English service of the Bartley Christian Church was launched, Ng was one of its founding members.

After his conversion, Ng began to seriously lay the groundwork for cross-cultural missions. In 1964, when he was offered a place at the University of Singapore after completing his GCE ‘A’ Levels, he was led by God to do medicine although his main interest lay in pure sciences. In 1966, after serving his National Service in the Singapore Armed Forces, he enrolled in the medical faculty. That decision paved the way for his journey as a medical missionary. In 1971, he graduated with an M.B.B.S. and in 1975, he became a fully qualified surgeon when he obtained his Master of Medicine (Surgery) and the Fellowship of the Royal College of Surgeons of Edinburgh (F.R.S.C.E.). He honed his surgery skills in the Department of Surgery at the University of Singapore from 1972-1977.

Ng’s mind and heart were set on Africa from the moment he responded to the mission call. Realising this, his pastor introduced him to SIM during his first year of medical school. This started a series of communication between Ng and SIM that eventually led to a life-long partnership. Ng’s maiden letter to SIM on September 24,1967 was momentous because none before him in Singapore or Asia had ever sought collaboration with SIM.

On March 31, 1973, Ng and Belinda were married. Belinda herself had also received God’s call to Africa before meeting Ng, and many of their friends saw their union as a divine match. Their first son, Nathaniel Ng Kuang Chern, was born in Singapore on December 4, 1975. Their second son, Joel Ng Kuang Jong, was born on April 18, 1979 in Galmi, Niger. Both their sons attended boarding schools in Nigeria and Niger in Africa. They continued their education in Singapore after the family returned at the end of 1989.

On November 26, 1976, the couple received a telegram from SIM Australia formally accepting them as SIM members. What followed was a period of mission orientation and deputation in Australia from June to July 1977 and French lessons in Centre Missionaire at Albertville in France from September 1977 to June 1978 to prepare them to serve in French-speaking countries in Africa. In the midst of their French lessons, SIM confirmed their assignment to Galmi in April 1978. On August 8, 1978, the Ngs landed in Niamey, the capital and largest city of Niger. On August 14, they flew to Galmi on a small plane that could seat up to six passengers only, piloted by a missionary from SIM Niger.

Ng served as a medical missionary in Galmi Hospital which was essentially a “bush hospital” surrounded by 25 villages. It was a non-profit mission hospital owned and administered by SIM International. Missionary doctors in the hospital often had to manage with limited equipment and inadequate facilities. To connect with the people and minister to patients in Galmi, both Ng and Belinda learnt Hausa, the local language. The language enabled them to make a significant breakthrough in their ministry as the local villagers warmed up to the couple. Ng’s medical expertise also earned him the nickname likita maza maza (“speedy doctor”). He was greatly respected and loved by his patients and was much sought after by the locals for medical treatment. Local staff who came to faith through him became medical personnel because they were so inspired by his service.

In 1982, Ng was appointed as the Francophone area medical coordinator. He became responsible for the medical ministries and institutions in the three French-speaking countries including Benin and Upper Volta (later renamed Burkina Faso). In his new role, he argued that treating the physical condition of a patient while overlooking his spiritual well-being was a major mistake. His conviction that spiritual health was necessary to prevent not only moral decadence but also physical deterioration gave renewed impetus for a holistic approach to healthcare in all the medical stations.

After serving 12 years in Niger, the couple finally returned to Singapore at the end of 1989. On January 1,1990, Ng was appointed regional director of SIM East Asia. When he and Belinda first joined SIM in 1976, they went under SIM Australia because SIM East Asia was non-existent. It was only about 2½ years after Ng’s acceptance by SIM Australia that enquiries to work with SIM started coming in from South Korea and Malaysia. In 1980, SIM East Asia was born. When Ng and Belinda returned to Singapore, SIM East Asia had about 30 East Asian missionaries. Ng’s cross-cultural experience equipped him in consolidating, planning and visioning mission activities to prepare missionaries for the field and build up home support teams.

But Niger remained in Ng’s heart and he continued making annual visits to Galmi Hospital until his death on January 7, 2019 from pancreatic cancer. He left behind his wife, Belinda, who had toiled alongside him in the ministry for 41 years, his two sons and their spouses, and four grand-daughters. Just before he passed away, Ng expressed his desire to have half of his remains buried in Galmi. In July 2019, this last wish was fulfilled. The Galmi community witnessed his burial at a memorial service held for him. On his deathbed when he was asked who he would want to meet first in heaven, Ng had replied unhesitatingly, “Jesus, to thank Him for loving me so much.”[3]

The writer attends the Amazing Grace Presbyterian Church and is the author of Not Forsaken: Dr Andrew & Belinda Ng’s Faith Journey to Africa And Beyond. 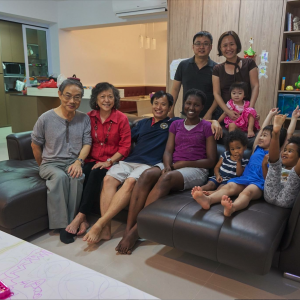