In the past, the term 'missionary' was given to a person of A ethnicity, A language, A culture, who went into B ethnicity, B language, B culture to spread the gospel. Today, it carries both a broad and narrow sense of meaning; a missionary is, in general, a person who leaves his/her own home country for another place to spread the good news.

The first officially appointed Methodist missionary to Sarawak was James Matthew Hoover from America. A very typical missionary, he was here for the Foochows and Dayaks. After him, there were many others from different countries who came to this foreign land.

Mom sent him off in tears

James M. Hoovers was from Greenvillage, Franklin County, Pennsylvania. He was born in 1872 and he dedicated himself to serve the Lord at age 15. In 1891, at age 19, he graduated from Chambersburg High School and went back to teach at his hometown.

In 1899, James saw in the ‘Global Missions' magazine, a pledge from James Mills Thoburn, the Bishop of India, inviting 12 young men to serve in India. It stated that they were to serve in India for five years receiving half pay, working in the farm for self provision and to stay single. He was touched and felt it was a calling for him. Not long after, he responded and was posted to Penang as a teacher. His mother was both sad and joyful when she bid him farewell. That was the last time she was with him.

In his personal record written in the Methodist Episcopal Church in Borneo 1901-1950, James M. Hoover recorded that when he visited Bintangor (previously known as Binatang or Bintang) in 1930, he slept in a hut in the jungle of Tunglai village. He used mosquito netting, slept on a canvas sheet covered with palm leaves and with a thin mattress his mother had made for him when he came out 31 years ago. This showed that he had left home with a blanket from his mother and brought it with him whenever he went out visiting.

James was a man who took pleasure in hardship. He said the three-hour journey from Sibu to Bintangor was fast and comfortable and had to travel another three hours into the interior by boat. The people there served him tea and bananas and he said it was like God sending crows to serve his prophet Elijah.

Today, there are still many missionaries who dedicate themselves to serve God in many places. We really admire them for their courage and commitment. How beautiful (on the mountains) are the feet of those who bring good news!

James M. Hoover stayed in Sibu for 32 years, leading the Foochow in progress. He was more than a missionary and was well loved by all the races here. The Malays even dubbed him “Tuan”. He was grieved by many and given a half-mast salute at his death.

James Hoover was buried at the Anglican Cemetery in Kuching as there was no Methodist Cemetery then.

In memory of James M. Hoover

Hoover Mission House and Hoover Square were built beside Masland Methodist Church to commemorate his dedication to the people of Sibu. Meanwhile, a kindergarten was named after his wife, Mary Hoover Kindergarten. There is also a James M. Hoover Memorial Park at Sg Merah dedicated to him in 2007, a joint project by the Sibu Municipal Council and the churches here. It is significantly shaped like a funnel to show how James had dedicated his whole life and God had used him as a channel of blessing to the people. 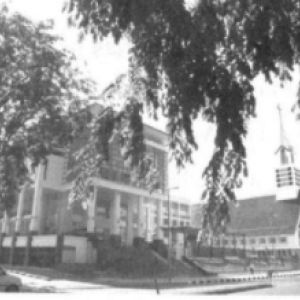