Drummond, as he was popularly known, was inspired to follow the church ministry of his father William Harcus, who left his home in the Orkney Islands at 16 for an apprenticeship in Edinburgh, and later quit his managerial post to train as a Presbyterian minister.

Drummond was a gifted musician and sportsman. Educated at Wesley College School, Sheffield, he also excelled in his studies. He read history at the University of Glasgow in 1903 and graduated with honours on November 7, 1907.

As an undergraduate, Drummond spent a year as a missionary at Wellington Church in Glasgow and six months as a student pastor on the Canadian Prairies in 1906. He then completed his theological course at London Presbyterian College (now Westminster College, Cambridge) in 1911. He had been given a £40 annual scholarship tenable for three years from the examining board of the London Presbyterian College and an equivalent bursary by the Dr Daniel Williams’s Trust of London under a scheme open to all dissenting churches in England. (The University of Glasgow awarded him an honorary Doctor of Divinity on June 26, 1945.)

When he obtained his licence after probation, his first appointment was at John Knox Church in Stepney, North London.

In 1910, the Presbyterian congregation in Kuala Lumpur, which held its first meeting in February 1902 under Rev William Murray, resolved to establish a church. In 1915, the Presbytery of London (north) sent Drummond to Penang for a trial period. After five months in Penang, he persuaded the Penang church to build a much-needed manse although he had no personal interest in it since he was single. He then moved to Kuala Lumpur and, after almost a year, he felt the real need for a ministry there.[2]

A congregational meeting on June 18, 1916, unanimously agreed that: “The Rev A.D. Harcus be invited to continue his service for a further period, at the conclusion of the present arrangement entered into for one year which expires in August.”[3]

Drummond’s induction to the Kuala Lumpur congregation took place at the YMCA Hall on October 11, 1916. Barely a year later on October 3, 1917, he witnessed the laying of the foundation stone for St. Andrew's Presbyterian Church in Kuala Lumpur. The plain granite block was inscribed with “1917” and beneath it was a box containing a Bible, hymn book, history of the congregation, some Malayan coins, and an edition of The Malay Mail newspaper dated October 3, 1917.[4]

Drummond played a major role in the construction of St Andrew's and its manse which were built on land granted by the government for religious purposes. Fundraising for the church building, however, was mainly borne by the “Ladies’ Working Association” which was formed in 1914 and later became known as the “Ladies’ Work Party”.

Although the church was built with “iron and concrete”, it could be said that it was also built with “knitwear, cookies and cakes” sold by the ladies.[5] The cost of building was $25,000 and the ladies’ fund-raising efforts helped the church to settle the building debt just 2½ years later, in October 1920. The Ladies’ Work Party continued to play an important role in raising funds over the years for extensions and other projects, such as a pipe organ in the main sanctuary.

Drummond’s new parish was enormous – it covered major towns on the west coast of the Malay Peninsula and he travelled extensively, setting up “outstation” ministries. In the first two years, he developed the outstation work in Klang, Jeram, and Banting in Selangor while the next phase saw expansion to the towns of Seremban, Rantau, Sungkai and Telok Anson (now Teluk Intan).[6]

Drummond, Rev R.D. Whitehorn and Rev D. Fergus Ferguson, St Andrew’s first three ministers, were recorded as having travelled 250,000 miles or over 400,000 km by road with the church’s Malay driver Pa’at Siboon to reach outstation ministries, without any accidents.[7]

Despite his busy schedule, Drummond found time for rugby, golf, tennis, and cricket, and was the star goalkeeper for the Selangor Club’s football team.[8]He was also a leader in the Kuala Lumpur music scene.

After a whirlwind romance of about five months, he was engaged to a newcomer to his church – Veira Lickley Spark, a nurse at the Colonial Hospital in Kuala Lumpur. Viera was born in Rousay, Orkney Islands, Scotland where her father Rev Alexander Spark was a minister. During World War I, she joined the Royal Navy Nursing Service and served in Malta. The couple were married at St Andrew’s Presbyterian Church on February 28, 1922. Rev William Murray of Singapore performed the service, assisted by Rev A.S. Moore-Anderson of North China.

That same year, Drummond was appointed Convenor of the Assemblies Malaya Committee, a post that he held until 1936. However, his recurrent bouts of malaria due to the trying climate in Malaya made it necessary for the couple to return to England in 1923.[9] A person of energy and clear judgement, his leadership on various London committees was later vital for liaison and in obtaining funds and ministers for Malaya.

Their only daughter, Jean, was born in Sunderland on September 12, 1923. Two weeks later, Drummond was welcomed as minister by the congregation of St Andrew’s Presbyterian Church in Ealing, London, where he served until 1945.

In March 1933, he returned to Malaya for a short period as Convenor during which he fulfilled the duties of minister to St Andrew's Perak (in Ipoh) and St Andrew's Penang. His eight months in that capacity gave him the distinction of having served in the pastorate of all three congregations within the federation itself. He made a trip to Kuala Lumpur in July to visit the church that he had built and to see old friends. In September, he returned to England and resumed his duties at St Andrew’s, Ealing.[10]

In 1944, he was made Moderator of the General Assembly of the Presbyterian Church of England.

On February 9, 1945, Drummond narrowly escaped death when the Presbyterian Church House at Tavistock Place, London, was bombed. A conference of the newly formed British Council of Churches’ Department of International Friendship attended by delegates from across the country had just concluded when a German V2 rocket struck the building (now the central office for the United Reformed Church), killing 10 people including the Rev William Thorburn Elmslie, the general secretary of the Presbyterian Church of England, leading officers and staff.[11]

Drummond was uncharacteristically late that day for a meeting and arrived at the Presbyterian Church House just when it was hit by the rocket. Aside from wiping out the newly built offices, the bomb also destroyed many of the church records. The work of reconstruction became a matter of urgency and Drummond played a leading role amongst the small band who laboured to retrieve what was possible. After Rev Elmslie’s death, he took over as the new general secretary from 1945-1952.

He suffered a major coronary attack in 1947 and went on to have another three after that. But he continued to be active in ministry, even travelling to attend the first meeting of the World Council of Churches in Amsterdam from August 22 to September 2, 1949 and the General Assembly of the Presbyterian Church in the USA in 1952. He spent three months there, during which he preached at churches across the country.

Drummond was appointed moderator of the Free Church Federal Council in 1951.

In 1952, he was awarded the Most Excellent Order of the British Empire (OBE) for his work in connection with the religious aspects of The Festival of Britain. He served as General Secretary of the Free Church Federal Council of England and Wales from 1954 to 1961 and as vice president of the British Council of Churches from September 1958 to 1960. He also wrote a book, History of the Presbyterian Church in Malaya.

He was a Free Church leader who held the highest offices both in the Presbyterian Church of which he was a minister and in the wider Free Church. He was convinced that the future of the Free Churches lay in a closer relationship with the Church of England and thus, he  devoted much of the last 20 years of his life to the British Council of Churches.

The writer is a retired army officer who graduated from the Royal Military Academy Sandhurst. From the age of six to 16, he lived in Singapore and Malaya (Sungei Petani and Seremban) where his father was posted from 1952-1962. He is married to Clair Cornwall Walker, the eldest grand-daughter of Rev Andrew Drummond Harcus. 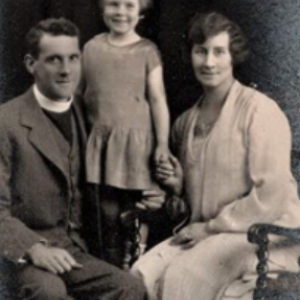