Abel Chong Kok Wai was born in 1949 in Muar, Johor, the third of seven siblings whose ancestors were from Guangdong in China.  The family moved from Muar to Kuala Lumpur when he was young due to poverty. He completed his education at the Tsun Jin High School in Kuala Lumpur.

He was introduced to Christianity as a young boy when he attended the First Assembly of God Church in Kuala Lumpur with the encouragement of his elder brother. He then became a Christian at a Christmas evangelistic meeting. After his conversion, he became a faithful and passionate believer, actively participating in church ministries and sharing the Gospel with non-believers. He and his brother often distributed Gospel tracts at the main bus stations in Kuala Lumpur. A few years later, he helped to lead Bible studies, youth groups, Sunday school and evangelistic meetings. With the encouragement of Elder Ong Leong Sow from his home church, he prayed for two years for God to open the door for him to attend Bible college.

In 1978, at the age of 29, he was called by the Lord to study theology at the newly established Malaysia Bible Seminary (MBS). During his studies, he often returned to serve in his church which also sent him to serve in a daughter church in Cheras. Before that time, two pioneer pastors had resigned one after another from the Cheras church which had about 10 members. Pastor Chong worked hard to help grow the parent church and was also responsible for the Sunday worship and youth ministry at the Cheras church. He completed his theological studies three years later and was among the first batch of graduates under then principal Reverend Lukas Tjandra (陈润棠牧师).

In 1983, he married Mary Kuok Meng Heng from a Methodist church and they had a son, Weng Hin, and a daughter, Kai Eng. That same year, he was appointed senior pastor of the daughter church, Cheras Elim Chapel, and later ordained as the pastor of the church. In 1987, Elim Chapel acquired a three-story shophouse as a permanent meeting place and in the year 1997, it officially became an independent and, later, self-sustaining church.

In 1991, Pastor Chong renovated the second floor of the church into a tea house to develop the church ministry with a focus on secondary school students and vocational youth. He promoted cultural activities at the Elim Tea House with talks on religion and current affairs, arts lectures, folk song appreciation and film meetings and calligraphy classes.

The tea house attracted many secondary school students and professional youths who came to visit and participate in the activities. Pastor Chong was able to touch base and build relationships with many of the tea house guests and gospel enquirers. It was the sowing ground for the Gospel and led people to Christ. However, it had to stop operating in 1995 due to the heavy workload of the church and shortage of staff.

In the 1980s and early 1990s, the country saw a rise in the number of drug addicts and many non-governmental drug rehabilitation centres were set up in the community in response to the government’s call. Pastor Chong suggested to the church board to set up a  rehabilitation centre as well. On September 3, 1993, the Elim Rehabilitation Centre was set up. Church member Datuk Tee Hock Seng and his partners gave the church several acres of land in Semenyih to be developed for the centre, which was approved and recognised by the Malaysian anti-drug authorities. The church ran the centre for 13 years during which over 600 people were admitted and counselled for rehabilitation. Some found Christ and were baptised. The centre was then handed over to a Christian organisation.

When Pastor Chong went through the data of the members of the drug rehabilitation centre, he found that many of them dropped out of school between the ages of 13 and 15 and came under bad influences. He felt that the church could set up a youth care centre to help counteract that. On New Year's Day 2003, the Elim Youth Centre set up a service centre called "Green Youth Garden" to provide accommodation and youth counselling services for students in a bungalow located near the church. Pastor Chong arranged for school teachers and pastors to hold tuition classes, counselling and Bible courses. During the operation of Green Youth Garden, many young people were led to Christ. But it had to cease operation a few years later due to funding problems and lack of staff.

In the 1990s, Pastor Chong's burden for mission work grew. He was unable to serve as a missionary as he was pastoring the church but he suggested that the church support and send Pastor Ng Kim Wah, who had just graduated from MBS, to the mountainous northern region of Thailand for mission work. During his service there, Pastor Ng brought the seeds of the Gospel to the ethnic minority communities. Since then, the church has supported various mission organisations financially.

Pastor Chong also conducted Bible courses for theological students in China from 2010-2018 and helped to equip a new generation of church leaders and preachers. In  2013, he started a cross-cultural outdoor evangelism ministry, the Indian Outdoor Sunday School, at the flats at Cheras Batu 3 (3rd mile) in Kuala Lumpur. This Sunday School was held every Saturday at the flats’ parking area, giving Indian children the opportunity to listen to Bible stories and worship, play games, and enjoy other activities. This ministry is still running today.

He was a humble and loving pastor and loved by all. He was also a good listener and a gifted personal counsellor. After the passing of Pastor Chong, the church was led by Pastor Chen Wen Xia who came to Malaysia from Inner Mongolia, China, in 1997 for further study. She had received the Lord at Elim Chapel and was baptised by Pastor Chong. With his encouragement, she studied theology at MBS in 2007 and later married an Elim Chapel member. This handover of the pastoral role of the church is indeed a testament of God’s mysterious providence.

The writer, a Chinese primary school teacher, is the son of Pastor Abel Chong Kok Wai. 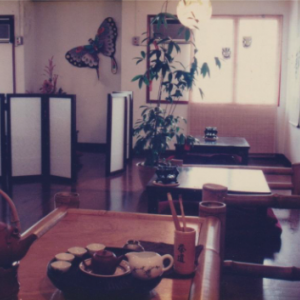